Lee sterling here of paramountsports.com and today i’m going to break down and
predict how i think the Clemson Tigers Football season plays out for 2021-2022. Now
Clemson last year finished 10-2! 10-2 is not going to get it done for Dabo Swinny! So
not gonna be happy! I feel sorry for those guys in off-season training! Not going to be easy even with Covid-19 so this season, believe it or not, could come down to how they open up the season. Clemson opens it up with a huge game against the Georgia Bulldogs Football program, this game is being played in Charlotte, NC so don’t be surprised if George is a couple points favorite here.

I don’t get it, JT Daniels is a pretty good quarterback. He’s solid but he’s nothing special . I just don’t love the receivers for Georgia either and Kirby Smart, their head coach, just doesn’t get it done in big games. How good has Clemson been in neutral site games? How about 17-5 against the spread! Pretty darn good! Dabo gets his players up for these games a lot of times against non-conference opponents or in the playoffs. They really trust in him. Their quarterback DJ Uiagalelei, I think he’s elite. I understand that he’s replacing a legend in Trevor Lawrence but in two games that he started, five touchdowns, no interceptions, completed 67 of his passes, also maybe a little more of a running threat!

I think you’ll see more option spread offense than you saw with Trevor Lawrence so that dual threat might be a little tougher for defenses believe it or not! They’re going to run the ball but where they could be elite is throwing the football. They have three receivers that are six three or six four, they have number eight Justin Ross. I mean he’s six four, he can jump 13-14 feet! He’s unguardable! He’ll be a first round pick! Frank Ladson, number 2, he’s six three! He’s scary good from down here Miami! Saw him in high school and then Joseph Knotts at number 10, also a six three speedster! Incredible athletes so i think they have three guys that are practically unguardable and I think that’s if i’m the coach! That’s how I’d roll!

Best defensive line in the country bar none it’s not even close. I think they also have a top three linebacker core, maybe top five or six defensive backs, and when you get a real good pass rush, you’re getting teams into third and long situations. At defensive backfield, a lot less stress against them whereas they didn’t have it last year. Those defensive linemen were good but they were starting to mature a lot of freshmen and sophomores so they’re going to be scary good stopping the run and also getting to the quarterback!

Take the schedule after they play Georgia, only one ACC opponent had a winning record so stay away from a couple of the better teams like North Carolina Tar Heels and the Miami Hurricanes on the other side. I mean there’s no one in Clemson’s league in the ACC but that’s also a factor. How about this, last time Dabo was 10-2 he went 15-0 the next year! I’m gonna predict he does it again! Everyone talks about Alabama, they talk about Ohio state, everyone loves Oklahoma this year but my favorite to win it all? Clemson Tigers!

You want to hop on board? 27 winning seasons! Paramount Sports, number one maybe in the country last year! NCAA College Football picks and NFL picks combined, average hundred to a thousand dollar wager made almost $20,000.00 and that’s after the juice and after fees. No one better! You want to hop on board? Go to paramountsports.com or give us a call here at the office 800-400-9741. 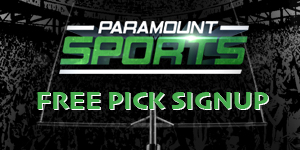